I was raised a Mormon but I have moved away from Mormon teachings and into traditional Protestant teaching of the Bible and Theology.  However, one thing that I have never missed is how the Mormon’s seem to really have the correct Christ-like attitude and lifestyle when it comes to being the Church or being the Body. 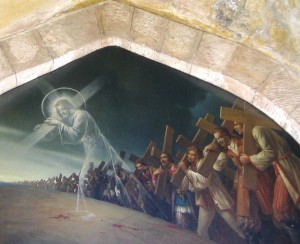 Since I am still technically on the rolls of the Mormon church (I never requested to be removed although I stopped attending when I was 8 years old) they have come by occasionally as I have grown up, including at college.  A few years ago it was really evident when during the snowstorm/blizzard here in our area the phone rang and it was the Mormons in my area checking on me and the family seeing if we needed a ride to the store or needed any services or help in our home.  They checked up I think twice that time if I recall correctly.

Most recently in our move they showed up at our door and saw that we were moving boxes and had the U-Haul truck sitting outside.  Well, instead of just checking up and asking how we were doing, they asked if they could help us move.  Long story short, right there, in their nice clothes along with going and getting another brother to help, they moved into the truck all of the really last heavy stuff that needed to go, like the freezer full of food, the desks and a small sofa.  After loading it on the truck they asked if I would have help from someone at the other house, when I told them no, they then rode on over to our new house and helped unload what we just loaded.  In total, nearly 3 hours of work and put everything where it needed to be (including taking off the freezer handle to get it down the steps.What shows their love was in the end, I was told to never hesitate to call on them in the future and that there is no reason why I should have done this without calling on them or letting them know.  They refused money, even for gas, and said, “The way you can thank us is let us sit and talk the next time we come around.”

I said all of that to say this: We in the Mainline churches seem to miss the part about being Christ to others.  We give largely and generously to our missions and other various ministries.  But rarely do we simply spend time together going into the community, checking on others and volunteering to help.  Not for the sake of checking off a box, or just because it is mission week with the emphasis on local home mission field. But just simply because Jesus told us to go and get involved, show them our love for one another.

I hope this convicts you as much as it convicts me.  When was the last time you volunteered to carry someone’s groceries, to paint their house, to walk their dog; especially if you have never met them and may never see them again.  Your chance meeting might be the only Jesus they experience in their life or the last person they see who has an opportunity to bring them to the Lord.  I’m not saying that you have to preach the gospel and demand a salvation prayer before or after your help them, absolutely not.  I’m saying that as you do your deeds and be His hands an feet, you are opening the door to a further conversation and time for you to “sit and talk” with them in the future.

So go, and do likewise.

This site uses Akismet to reduce spam. Learn how your comment data is processed.